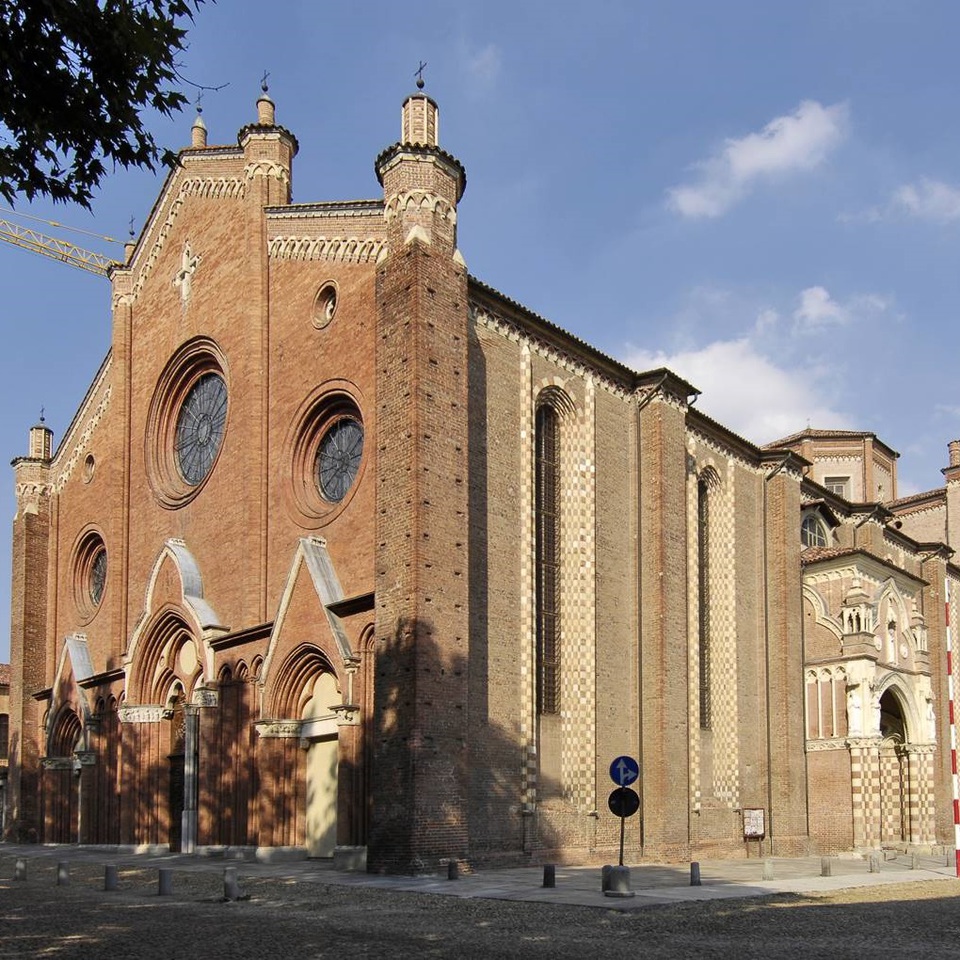 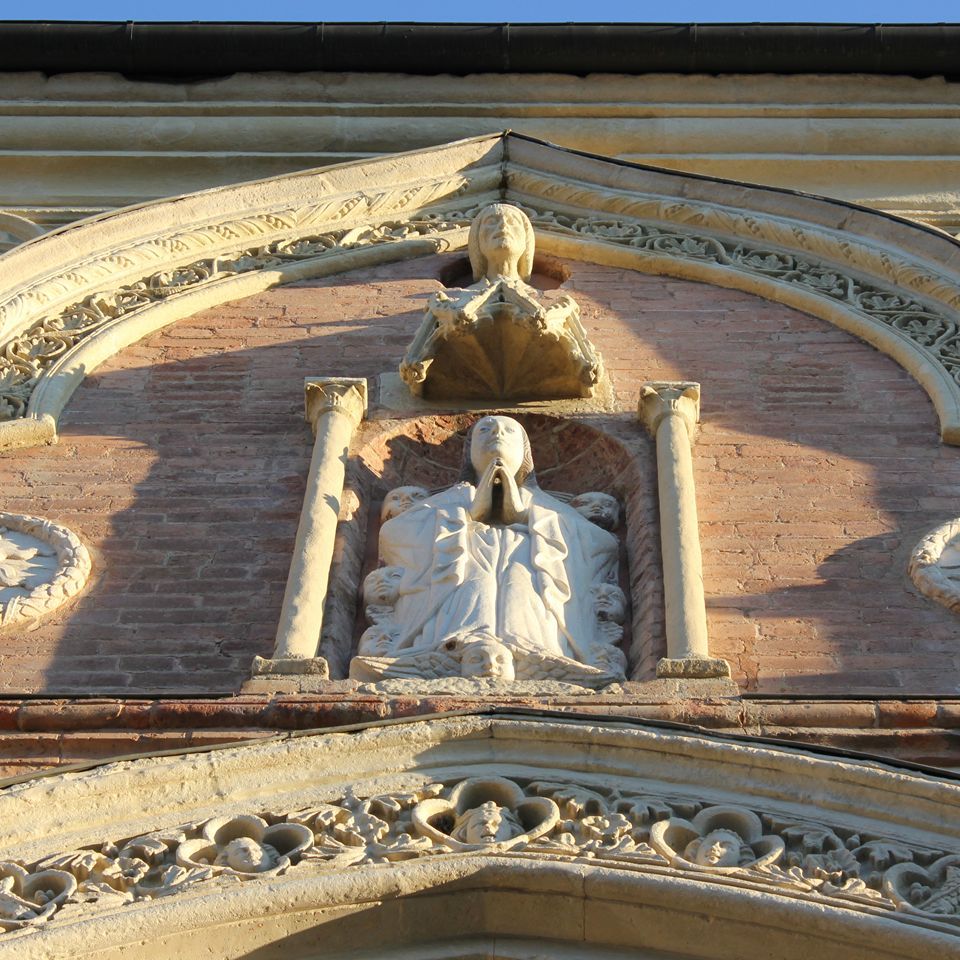 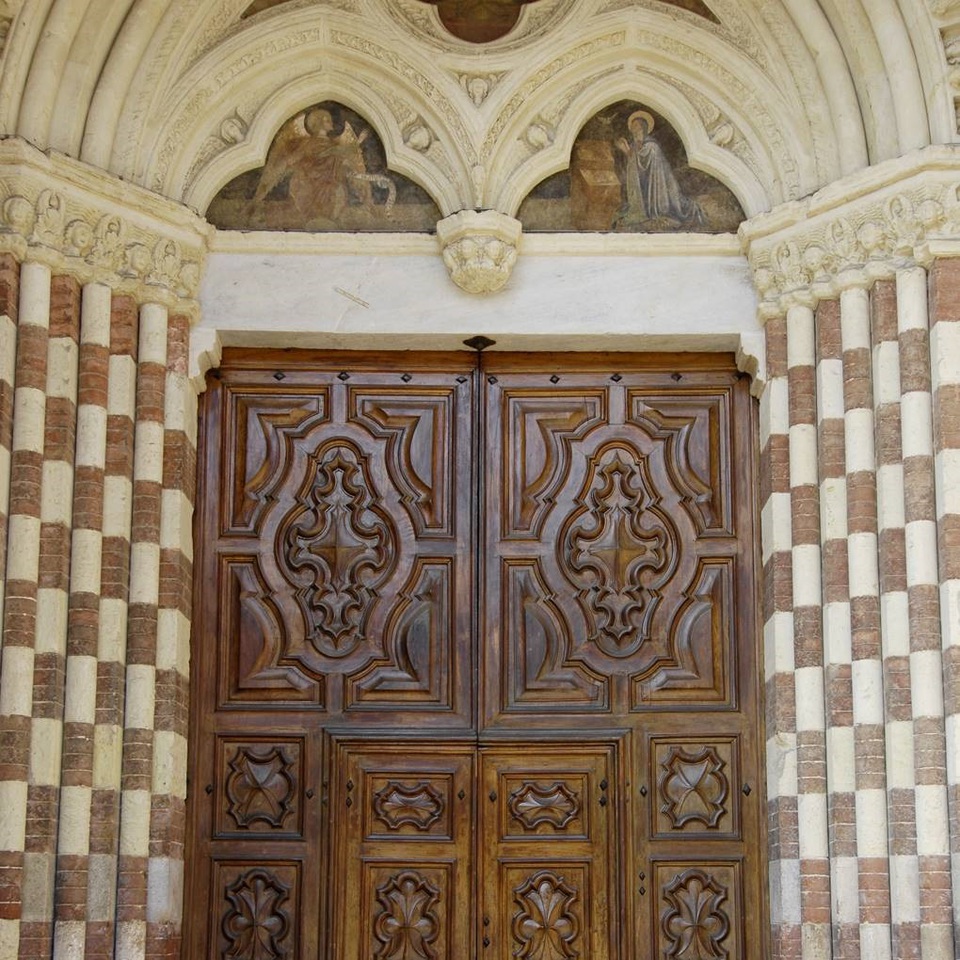 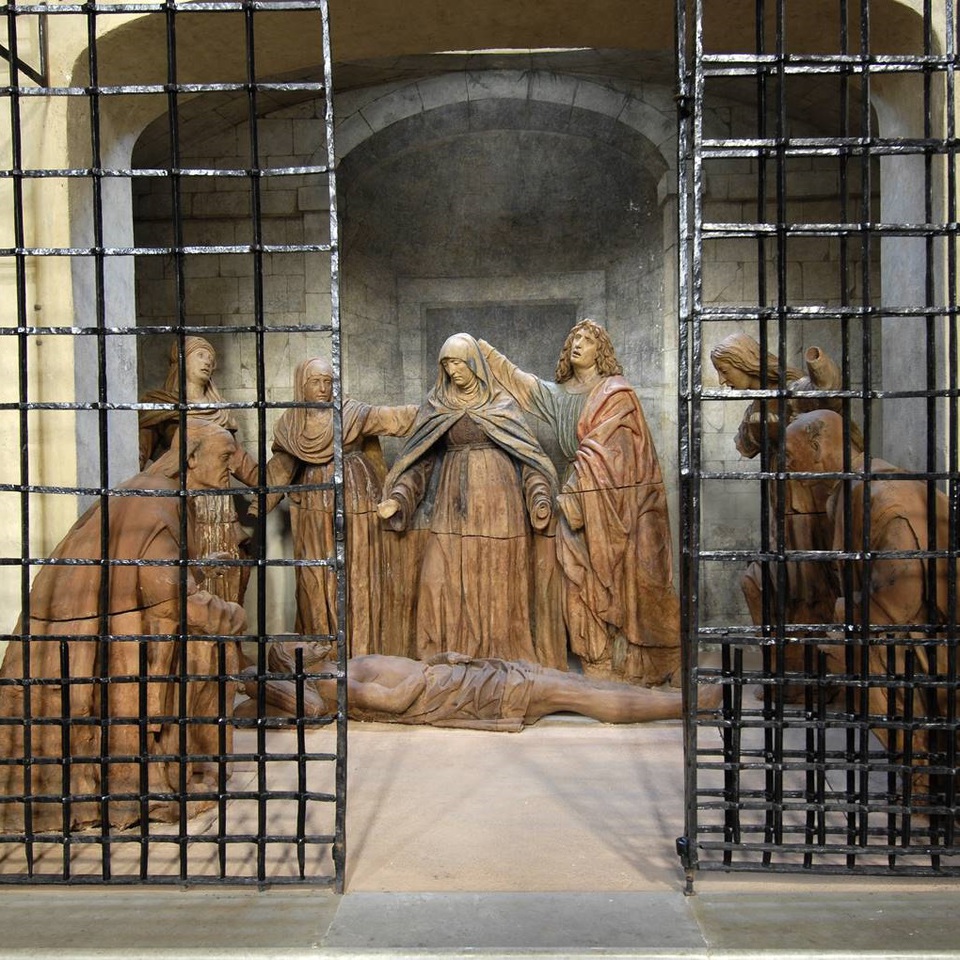 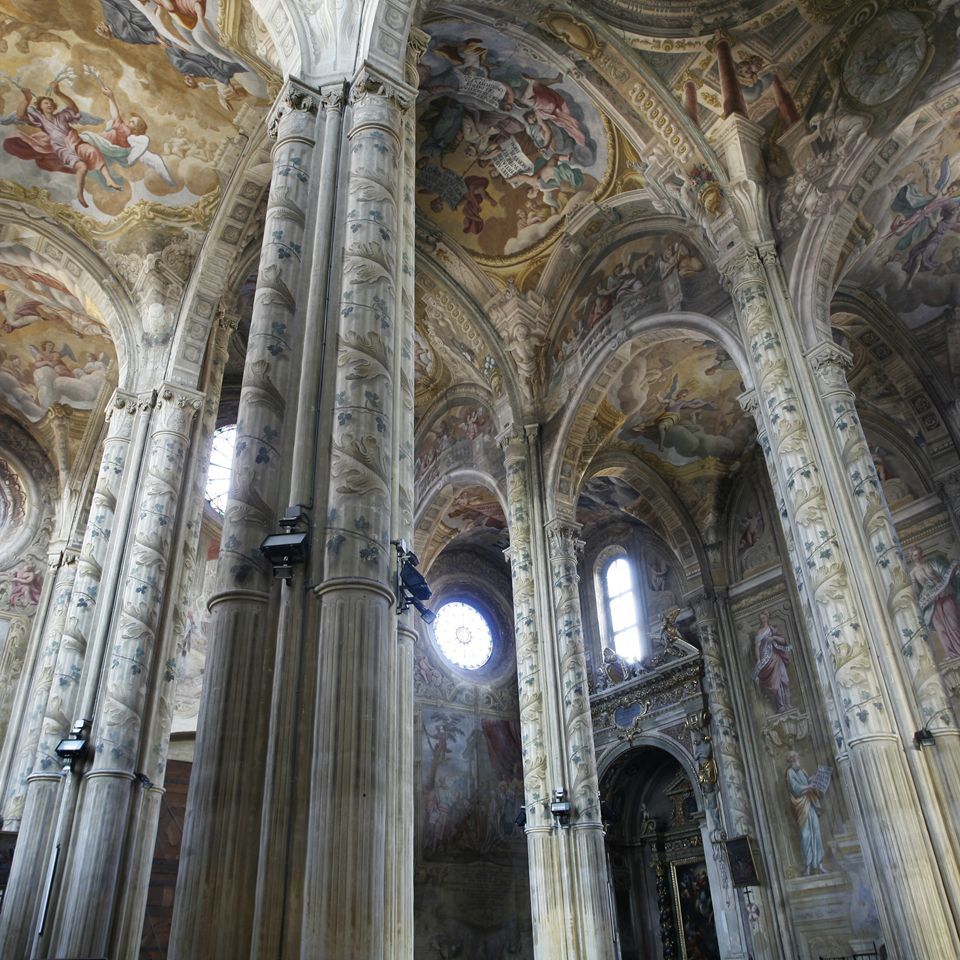 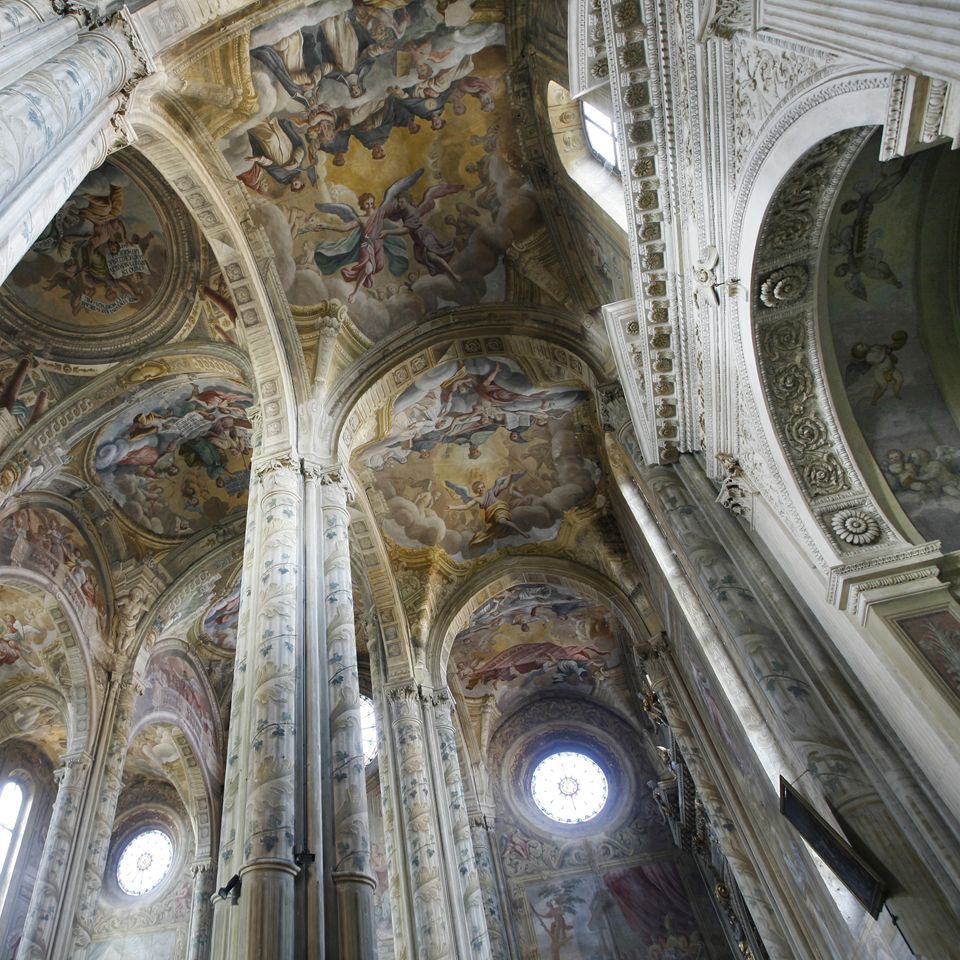 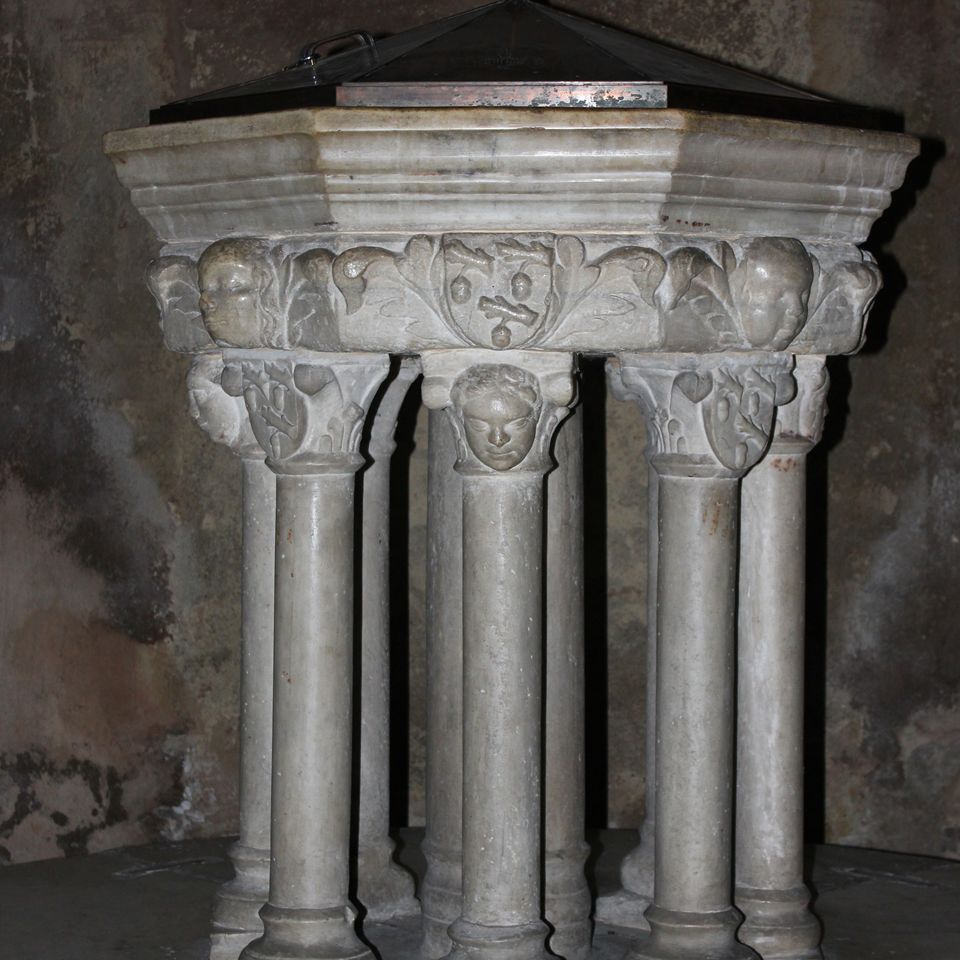 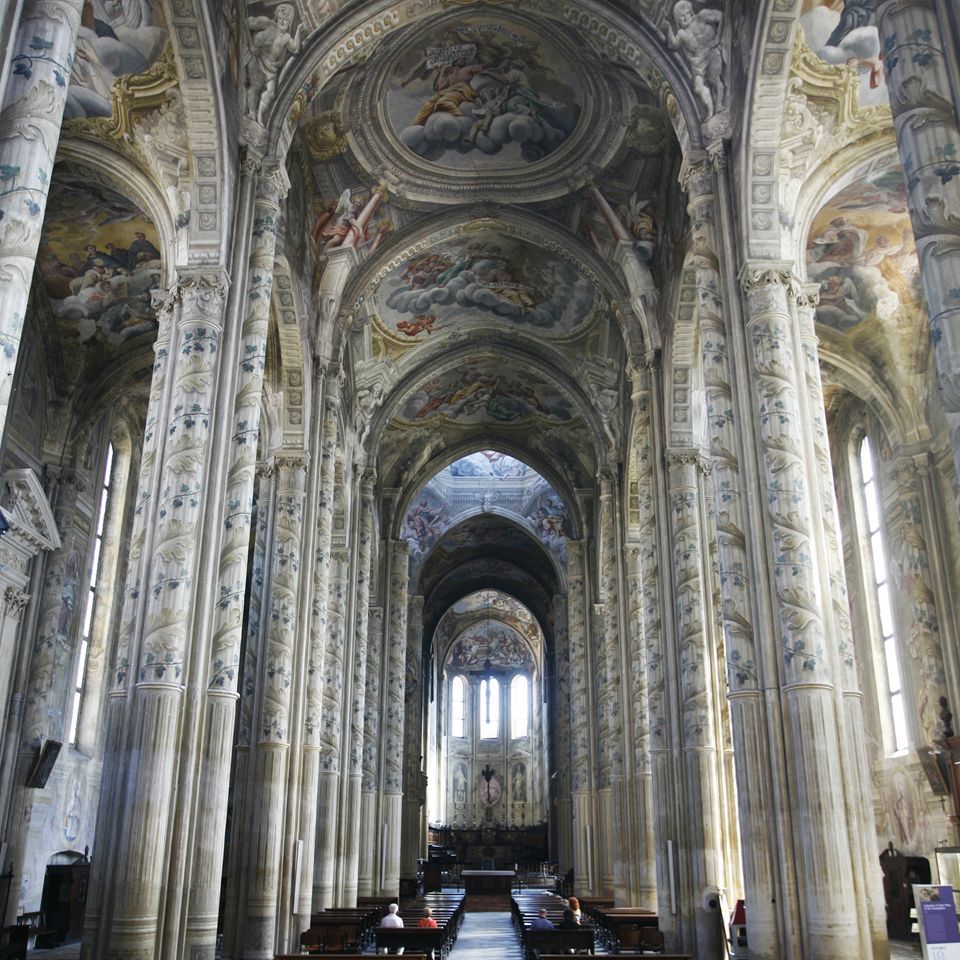 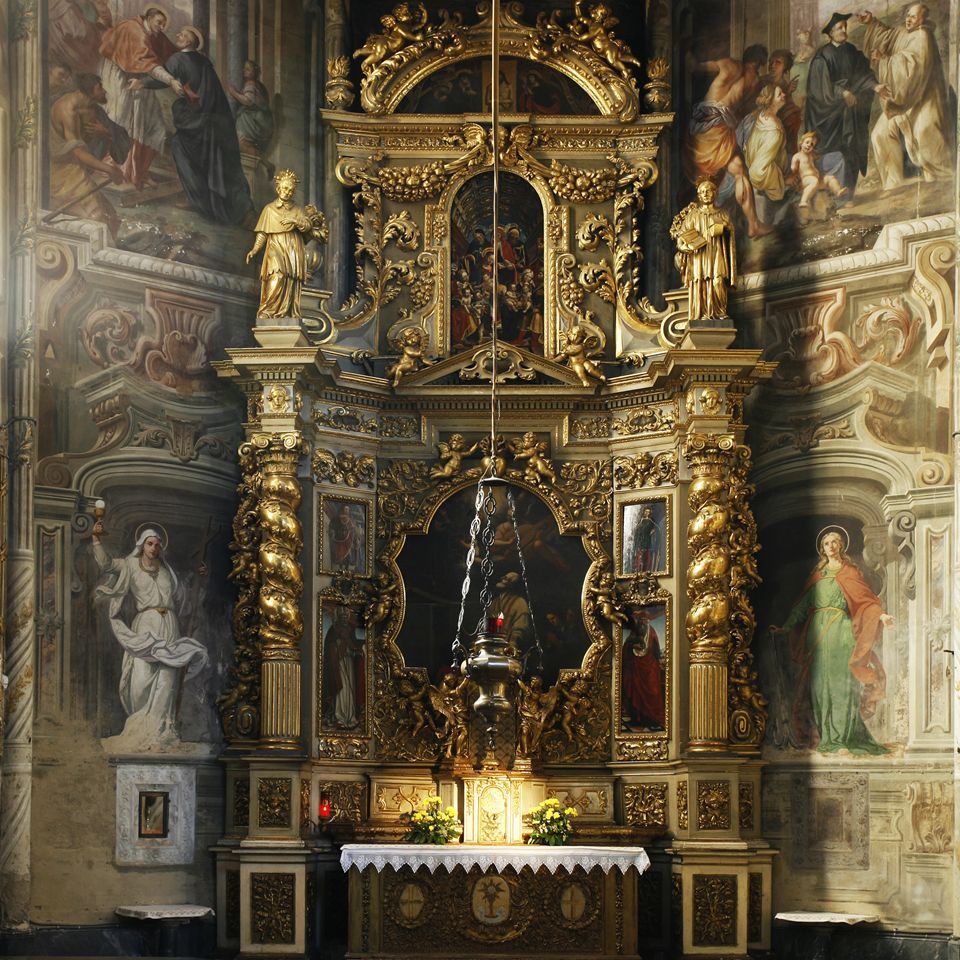 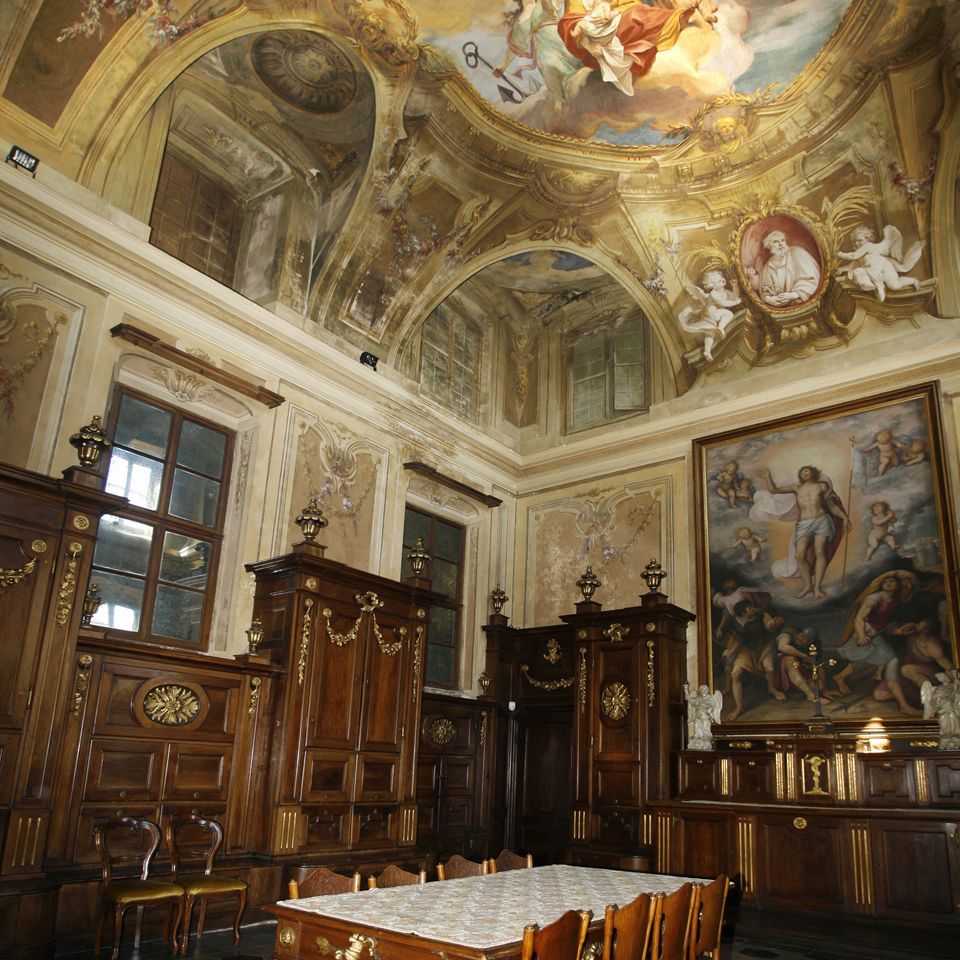 Asti’s Gothic cathedral is the result of three rebuilding phases that took place over 700 years. It is made from terracotta and tuff, with areas of polychrome decoration, and bricks alternating with sandstone blocks. The projecting façade has two orders. The lower level has three portals with Gothic pediments, of which only the central one is still open today. The others were walled up in 1711, by order of Bishop Milliavacca to allow the fresco decoration of the counter-façade by Francesco Fabbrica, showing the solemn consecration of the Romanesque cathedral in 1095 by Pope Urban II, in the presence of Bishop Oddone. The cathedral’s main entrance is known as the Portico Pelletta and is situated on the southern side of the building. The Romanesque campanile dates from 1266. It has a square plan and six storeys, although it originally had seven. The cathedral itself has a Latin cross plan with a nave and two aisles supported by compound piers. The piers are surmounted by capitals that, in the nave, are adorned with the episcopal crest of the French bishop Arnaldo de Rosette, who was probably responsible for the reconstruction of the building in 1327. The crossing is surmounted by an octagonal drum. The long rectangular chancel narrows towards the pentagonal apse, with five tall windows, and features a polychrome mosaic floor that can be dated between the 12th and 13th centuries. The chancel and apse are the result of the elevation of the Romanesque structures in 1762, during the episcopate of Mons. Caissotti, to the design of architect Bernardo Vittone, supervised by architect and engineer Giovanni Peruzzi. Beneath the choir is the “Bishops’ Crypt”, where traces of Romanesque architecture have been found. The cathedral has two organs, one built by Liborio Grisanti in 1768 and the other by the Serassi brothers in 1844.

The right aisle houses three chapels – one dedicated to Saint Theobald and Saint Secundus, one dedicated to Saint John the Baptist, and one to Saint Joseph – with fine Baroque altars and important altarpieces. The chapel dedicated to Saint John the Baptist is home to a Virgin Enthroned with Saints, while the Saint Joseph Chapel has a Marriage of the Virgin, both painted by Gandolfino da Roreto. The left aisle is adorned with the Lamentation over the Dead Christ, a 16th-century terracotta sculptural group. Lustral basins are placed on Roman capitals near the entrance, one dated 1229, and the baptismal font, which dates from 1468. The left transept ends in the chapel of the Holy Trinity and Saint Francis of Sales, and the right one in the chapel of Saint Philip Neri, destined to house the Eucharist, which is adorned with the dismembered polyptych of the Genealogy of the Virgin with Saints and the lunette of the Deposition, both also by Gandolfino da Roreto. The right aisle ends in the chapel of Saint Mary Major, formerly the chapel of the Epiphany, with a marble altar and a statue of the Virgin of the Assumption in silvered and gilded copper, made by the goldsmith Tommaso Groppa during the first decade of the 18th century. The chapel is decorated with late 18th-century frescoes by Carlo Innocenzo Carloni depicting the Adoration of the Magi and the Triumph of Religion, and trompe-l'œil architecture by Pietro Antonio Pozzo. The left aisle ends in the chapel of the Ascension, or the Madonnina, which houses an 18th-century altar from the charterhouse of Valmanera and a 15th-century fresco. The high altar is situated in the centre of the chancel. It was made from polychrome marble, by Lombard craftsmen in 1732, to a design by the architect Benedetto Alfieri, with gilding by the goldsmiths of the Groppa workshop. Behind the altar are the Rococo choir stalls, completed in 1771 by the sculptor and cabinet-maker Giuseppe Giacinto Salario. 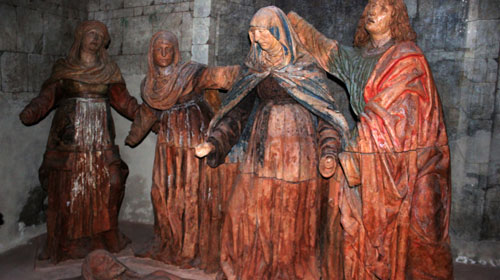 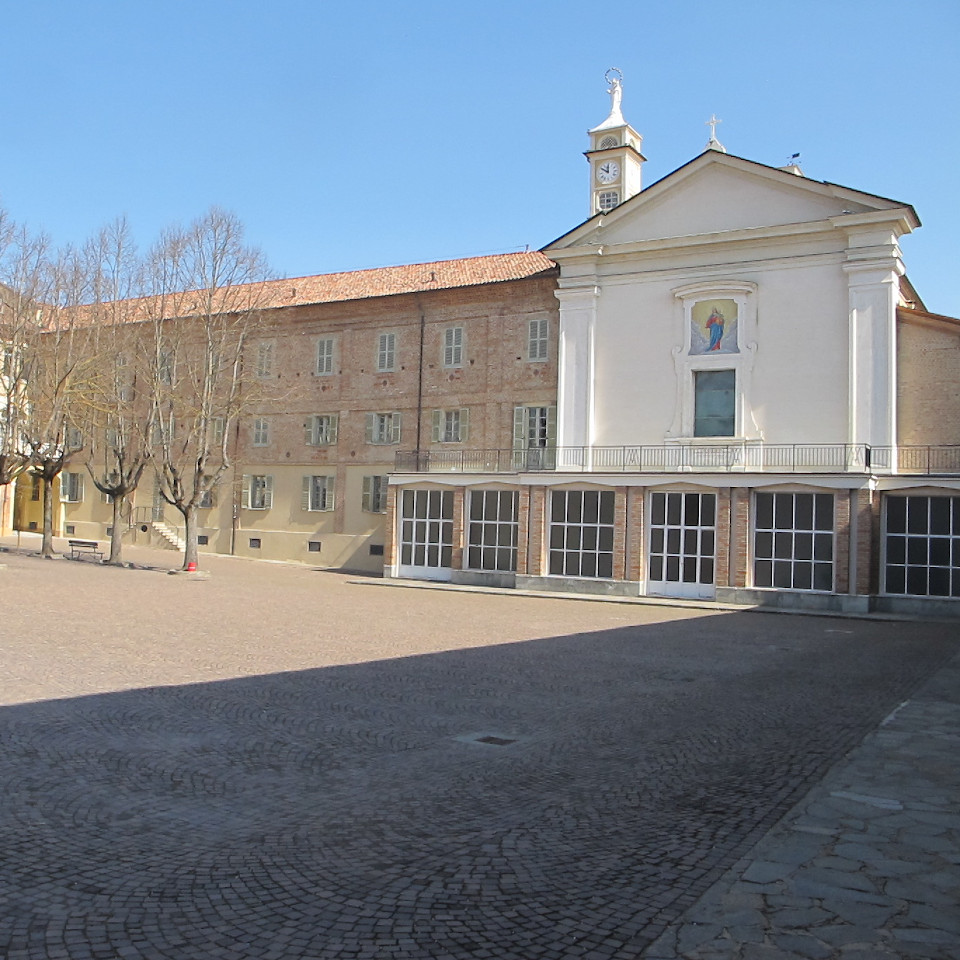 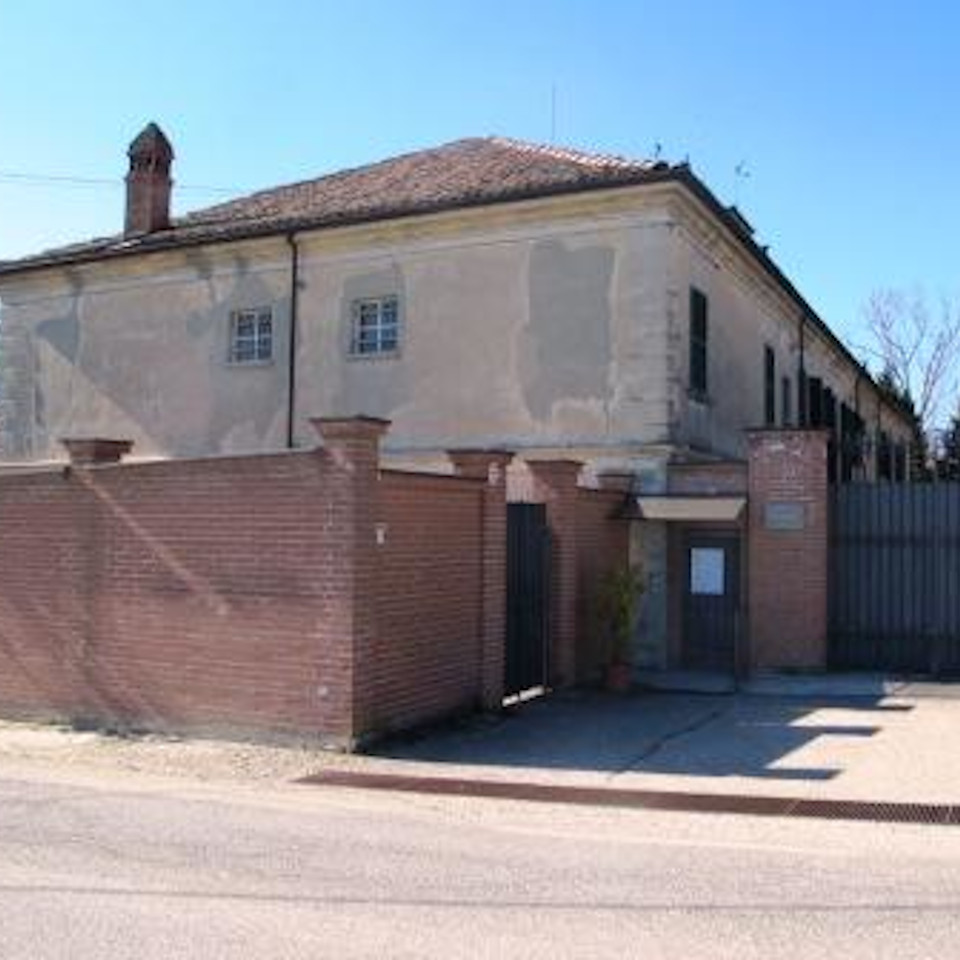 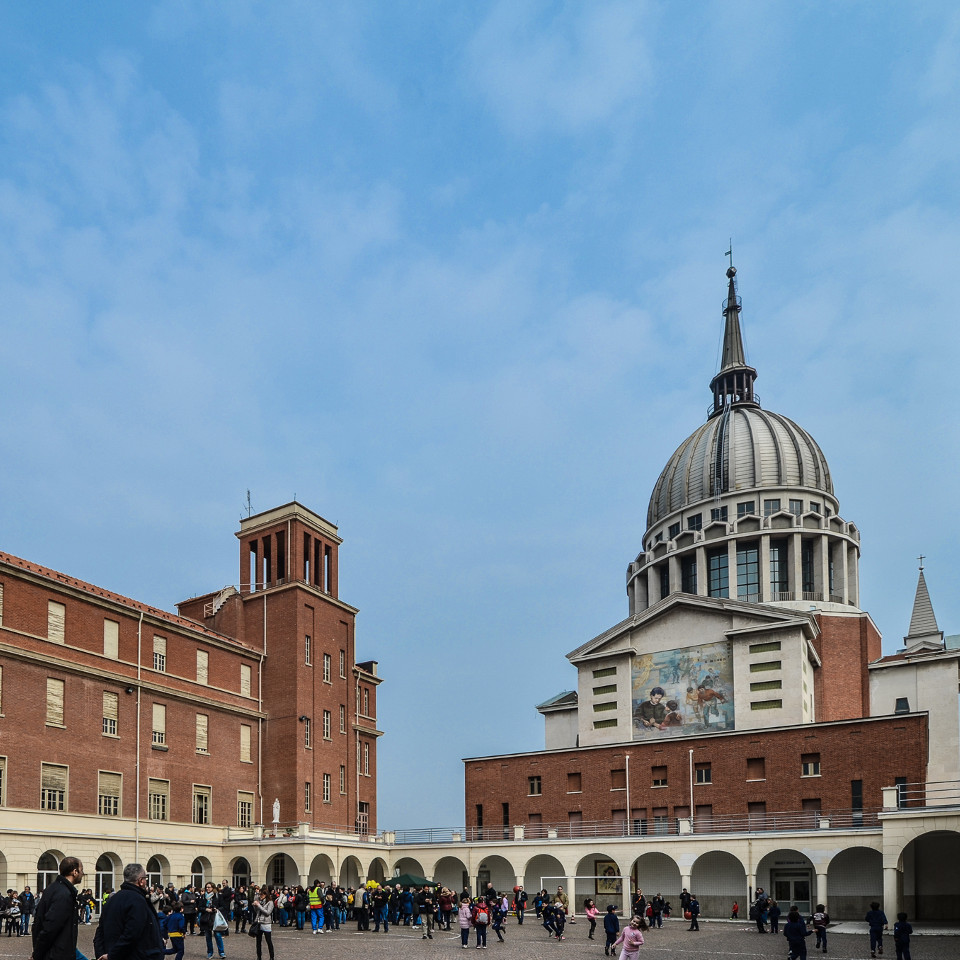